Objective: In this study, it was aimed to reveal the relationship between sleep quality, fear of death and socio-demographic factors in middle-aged and older individuals who applied to the hospital. Materials and Methods: This descriptive study was conducted by giving a questionnaire to middle-aged and older individuals who agreed to participate in the study, who were hospitalized in the Health Practice and Research Center of a state university in the Central Anatolia Region. Data Collection Form, Thorson-Powell Death Anxiety Scale and Pittsburgh Sleep Quality Index (PUKI) were used for all middle-aged and older individuals who agreed to participate in the study. A total of 100 individuals participated. The socio-demographic characteristics of the elderly who participated in the study were indicated by numbers and percentages. Student t test, Anova and analysis of variance were used to compare the scores obtained from the scales. Results: 38% of the individuals participating in the study are in the 45-64 age group, 36% are in the 65-74 age group, and 26% are in the 75 and over age group. 78% of them reported that they have a drug that they use regularly. In the correlation analysis, a weak linear correlation was found between DAS score (high score indicates increased fear of death) and PUKI in the opposite direction (r=-0.216) and economic level perception (r= 0.238). In the correlation analysis, there was an inverse relationship between PUKI score (high score indicates increased sleep problem) and DAS, poor (r=-0.216), perception of quality of life, perception of health status, perception of adaptation to life, perceived age, education level and perception of economic level. There was a weak linear correlation between the number of chronic diseases (r= 0.301) and the number of chronic diseases (p<0.05). Conclusion: According to the correlation analysis, there is a weak correlation between death anxiety and sleep quality in the opposite direction. 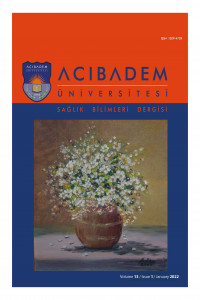