Purpose: Periodontopathogenic biofilm structure is one of the most important factors in the etiology of inflammatory periodontal diseases. Quorum Sensing inhibitors (QSi) can inhibit biofilm development/maturation by inhibiting bacterial communication mechanism. In this study, we examined the effects of D-ribose (QSi) on the planktonic growth and bio.film formation characteristics of Fusobacterium nucleatum, an important periodontopathogenic species that has a binding function on early and late colonization types for the development of periodontopathogenic biofilm. Methods: The strain of F. nucleatum (ATCC 25586) and two clinical isolated strains (AHN 9910 and AHN 9508) were used in all tests. Planktonic proliferation (measured as colony forming units) and established biofilm tests (measured as total biofilm mass) were performed in the presence of 50mM D-ribose. Results: In planktonic growth tests, statistically significant increase was observed for F. nucleatum ATCC 25586 and AHN 9508 strains (p<0.05). In established biofilm tests, a mean-based decrease was observed for all species, but a statistically significant difference was found only for F. nucleatum AHN 9910. Conclusions: The fact that the presence of D-ribose can increase the planktonic growth of F. nucleatum and its inhibitory effect on biofilm development shows that it may have an adverse effect on biofilm development by disrupting the Quorum-Sensing system. 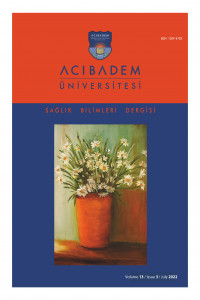